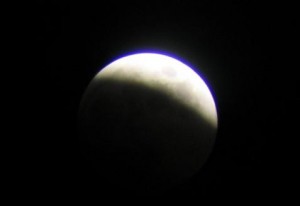 Sky watchers, look for a warm place to view this month’s lunar eclipse on the night of December 20th.  It promises to be the best lunar eclipse until April 2014 for North America.

Lunar eclipses occur when the moon passes through a point in its orbit in which the Earth is directly between it and the sun.  When the moon enters the shadow of Earth, it creates a lunar eclipse.  A total lunar eclipse is when the entire moon is completely inside the Earth’s shadow.  Since the sun’s rays are bent by Earth’s atmosphere so that some still reach the moon, the moon is still visible in an eclipse.

For the Western Hemisphere, the eclipse will “officially” begin on December 21 at 12:29 am EST as the moon begins to enter Earth’s outer shadow.  The start of the total eclipse if 2:40 am EST, with the greatest eclipse occurring at 3:17 am EST, and ending the total eclipse at 3:53 am EST.  This total lunar eclipse lasts only about 72 minutes from start to finish.

The entire total lunar eclipse will be visible from all of North and South America, the northern and western parts of Europe, and a small part of northeast Asia, including Korea and much of Japan.  Totality will also be visible in its entirety from the North Island of New Zealand and Hawaii.  In all, an estimated 1.5 billion people will have an opportunity to enjoy the best part of this lunar show.

December’s total lunar eclipse promises to ring the year 2010 out with a dazzling show, weather permitting, this holiday season.  But bundle up and stay warm!!