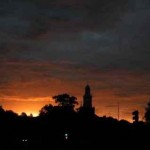 I’ve already told you that most days I walk early in the morning, before the sun is really up. The birds are just awakening, and the greet me each day with lovely songs.

But, as I’ve mentioned, since it’s not fully light, I rarely see the birds, I have to identify them by sound alone. As you can imagine, this leads to many puzzles. My CDs of birdsong, with about 100 birds in New York State on them, help out a lot. However, since New York is a big state, there are birds on there I’ll never hear near my home, especially the water birds, and others that I do hear but aren’t on the disks. That’s the situation I was in a few years ago.

One morning before dawn I was at the top of my road, near a meadow. I heard a new bird call I’d never heard before. I stopped walking and listened, and it seemed that the bird was flying around directly overhead, and not too high. The sky was light enough for me to see the bats flying, but this was no bat, and there clearly were no other birds in the sky near me. Without the aid of even my eyeglasses, much less field glasses, I saw nothing, and ultimately ended up walking home.

Then next morning, there was the mystery bird again. This time, it seemed that he followed me across the length of the meadow before seeming to fly overhead. Was he attracted by the sound of the bell I wear in the wee hours to warn bear, porcupine, raccoons, and other wildlife to move away? It seemed so. But I never could see anything.

This went on for days. I tried describing the sound to expert birders and interested friends alike. I don’t whistle, and this bird wasn’t making a whistling call anyway. So I’d hum in a particular rising note pattern that the bird made consistently, all the while using my hand to wiggle the skin of my neck. (And doesn’t that paint a pretty picture?!) No one could ID my mystery bird.

I then figured that maybe it would be important to know if the bird was only there in the early morning, or also at other times in the day. So I made several trips up the hill at various hours. My little feathered friend was consistently present at dawn and dusk, but never any other time. By now I’m spending lots of time in the middle of the road at odd hours, sometimes driving up there, but usually walking the two-mile round trip.

My next step was to bring my cell phone on my morning walk with me. Call someone at 5:15 A.M. to see if they can hear a bird call. Go ahead, I dare you! Actually, I had warned my friend that I would do this, and being an early riser herself, she was up for it. But unfortunately the song was soft enough that it didn’t travel through the phone.

Not yet defeated, I borrowed a friend’s little battery-operated voice recorder. In fact, she had two of these little devices, so I borrowed both, not knowing which would be more sensitive. Back up the hill again, I tried both recorders with no luck — all I heard was static when I played the tapes back.

I am nothing if not persistent, and just couldn’t give up. I just kept asking everyone. Finally I asked the right person – a friend who, years before, had lived downhill from where I heard my crepuscular caller. She thought she had not only heard, but also seen my mystery bird, and gave me yet another clue to follow up on, with a potential bird’s name. Now I’m off to the internet, trying to find an online recording of this little guy. Although “common” is in his name, a recording of his voice is nowhere near as common as many other birds. But at last I found one, and did a positive ID.

Have you guessed what it is yet? It’s Gallinago gallinago, the Common Snipe. If you listen to his voice on the linked page, it’s not his sharp chip I was hearing, but the warbling rise and fall at the end. There’s a swamp nearby, and this long-beaked water bird somehow figured that he’d find a sweetie in the meadow at the top of the hill. I doubt I’ll hear him on my road again, because someone built a house where he’d been, but it sure was a fun time solving that puzzle!

What was your greatest birding mystery?