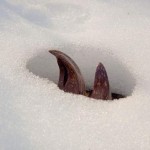 With large showy green leaves, they defy winter’s grip and skunk cabbage sprouts often are the first plant in the woods to appear each spring poking up through the crusty snow.  A deep wine-colored or maroon knob twisting its way up through the snow and frozen mud reveals the early spring emergence of skunk cabbage.

Skunk cabbage is known to generate its own heat. Skunk Cabbage is one of the few plants in the world that are ‘thermogenic,’ -they create heat. This heat can be as much as 20-360F above the ambient air temperature.

This auto-warming helps the plant to push its way through the frozen ground. If you are at the plant at the right time (early March) and find skunk cabbage emerging through the snow or ice, touching the tip of the plant with your finger will reveal that yes, they plant is actually warm! Skunk cabbage thermo-regulates its temperature, just like certain mammals do.

It is interesting that Eastern Skunk Cabbage continues to grow during the winter, buried under the snow. Just enough sunlight reaches it through the layer of snow to maintain minimal photosynthesis.

Usually where you find skunk cabbage, you find a lot of them.  Skunk cabbage does more than just exist; it crowds-out competitor plants.  This large monocotyledon weeds take-over a swampy area where few other plants might grow.  If you head over to our Eshelman Property you might find some skunk cabbage working its ways up through the ground along our Bull Head Run and Bog Trail.

Breaking the leaves and stalk of the skunk cabbage causes it to give off a distinctly unpleasant odor, much akin with that of a polecat or skunk. This unpleasant odor also serves to thwart larger animals from foraging in or around skunk cabbage patches. When you find a patch of mature skunk cabbage, it is usually pristine, undisturbed knee-high bushes of green. Few animals except for bears emerging from hibernation will disturb a patch of skink cabbage.

Skunk cabbage plant was considered a medicinal plant in the early part of the last century.  It was used as treatment rheumatism, and was used by the Native Americans for relieving the pain and swelling of minor burns, and as food. 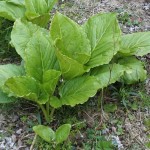 Skunk cabbage is not generally eaten by humans as a normal gathered food but in times of famine, it could be used. The roots are toxic and the leaves impart a hot, peppery taste in the mouth but if dried first, they could be used in boiled soups. Skunk cabbage leaves were also used to wrap fish prior to cooking in the hot coals of a campfire. Protecting the fish from burning while being steamed, the leaves doubtlessly imparted their hot peppery flavor to the meat.

As quickly as they appear in March, skunk cabbages are usually gone by August. However, the skunk cabbage is still there, living and growing deep underground.

Skunk cabbage is long-lived. It is believed that some plants might be over 100 years old or even older! Year after year, they return and perform their annual magic in the swamps and wetlands. Here is a place where few other plants can survive yet alone thrive, as does the Eastern Skunk Cabbage.

← Love is in the Air, or it is Skunk?
It’s Your Call Challenge →