Love is in the Air, or it is Skunk? 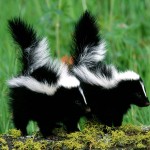 This morning as I was eating breakfast, my dad looked out the window and saw a skunk walking down our driveway!  It was interesting to see it walking slowly down our gravel driveway and down towards the barnyard.  Later when I went outside, I looked for tracks in the snow but the snow had hardened over night and the skunk did not leave tracks.

Skunks do not hibernate but generally remain inactive in a den, sometimes with other skunks during the winter months.  As the weather warms up, they venture out of their dens to find food or in late winter, love.  Mating occurs in the late winter months of February and March and young are born from mid-spring until mid-summer, in litters of 4-6.

Skunks are a member of the weasel family.  The two most common skunks in theU.S.are the striped skunk and the spotted skunk.  The striped skunk, which is common aroundWestern New York, is characterized by a black body with a narrow white stripe on the forehead and wider stripes that extend from the neck along each side of the back.  The amount of black or white can vary.  The skunk in my driveway this morning seemed to have more white than I normally picture on a skunk. 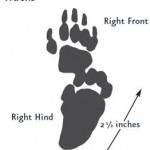 Skunks have sharp claws on their front feet that are used for digging insects and worms.  Their footprint and moving pattern distinguishes them from other similar-sized animals.  Their diet consists mainly of insects such as crickets, grasshoppers, beetles, and various insect larvae.  They can dig and root in the soil looking for insect larvae.  Sod lawn damage by skunks often has the sod “rolled back” in a similar fashion as done by raccoons.  They will also sometimes eat poultry, eggs, garden vegetables, and fruit.  They will also feed on mice, rats, ground squirrels, shrews, moles, and other small animals.

As most dog owners know, skunks are known for their discharge of an obnoxious odor when provoked.  This is released primarily in self-defense.  A skunk can release a spray of oily liquid as far as 10-15 feet and spray up to six times in succession.  The fluid is painful if it gets in a person’s or pet’s eyes and may cause temporary blindness for about 15 minutes.  Skunks will usually stamp their feet, hiss or growl and raise their tail as a warning of an oncoming discharge.  After a full discharge, it takes up to 10 days to replenish the supply.

So as spring creeps closer, remember our smelly friend is beginning to venture out and look for his or her future mate.  A skunk generally sprays only as a last resort and prefers to retreat from danger.  However, we do not want to test its patience!