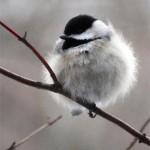 Members of the titmouse family, small, plump, & aggressive chickadees are full of personality.  They are acrobatic as they dance around tree branches, never staying in one place for long.  Their black bib & cap, combined with their white cheeks, gives their faces a striking appearance.  Their loud “bi-dee-dee-dee” call makes them sound louder than they really are.  On sunny days, a loud, whistled “pheer-pheer” welcomes spring.  In summer, they nest in tiny cavities in tree trunks or hollow limbs.  They can be found throughout New York year-round.  At feeders, they prefer black oil or striped sunflower seeds. 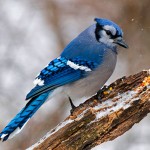 Bold, loud, & clever birds, blue jays are members of the crow family. They can be found throughout New York year-round.  Larger than a robin, a blue jay adds a dazzling splash of color to New York’s winter landscape.  When nervous, it holds its blue crest up.  A single “flight feather” from a blue jay is beautiful, with a combination of blue, black, & white.  Their calls are well known: a “screaming jay” call & another that mimics the sound of a hand-operated water well pump.  Blue jays can eat a large quantity of food at feeders, making them less welcome to some birdwatchers. 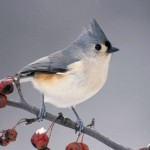 A relative of the chickadee, the gray, tufted titmouse looks something like a cross between a chickadee & a blue jay.  With a blue-gray crest & back, large dark eyes, & tan-colored under parts, the titmouse is unmistakable.  They are found throughout New York, except the north country.  Like chickadees, titmice are cavity nesters, & like cardinals, they are shy at feeders.  It is also another bird whose call announces the coming of spring, its call is a loud, whistled “pheer-pheer-pheer.” 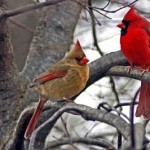 The unmistakable brilliant red, crested, black-faced male cardinal is a favorite of birdwatchers.   But male & female cardinals do not look alike.  Females are much browner, with a splash of red-orange on the wings, tail & head.  Perhaps aided by bird feeders, cardinals are expanding their range northward, especially along Lake Ontario’s eastern shores & into St. Lawrence Valley.  Ground feeders, they often feed under birdfeeders, picking through seeds that other birds spill.  Cardinals area bit timid at feeders; they may be the fires to leave at the slightest disturbance.  Cardinals have several well-known songs, including “birdy-birdy-birdy” & “What cheer, what cheer, what?” sung loudly from a perch.

← Christmas Trees: Artificial vs. Real
Love is in the Air, or it is Skunk? →