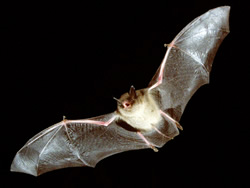 Bats can squeeze in the tiniest openings. As a result, it’s not uncommon for me to get a bat in my house on occasion. At least it wasn’t for many years, before white nose syndrome became a problem in our region.

My memory certainly isn’t the best, but in my mind, a bat in my house was a summertime happening. So I was quite surprised when I was visited by one last night, on April 2.

I tried my usual non-aggressive ploy: open both my doors and turn on every light in the house. This usually works because the bat doesn’t really want to be in my house any more than I want him there, and he really doesn’t like all those lights. So he uses his sonar to find those open doors and gets out quickly & easily, completely unharmed.

It worked like a charm last night. I was glad it didn’t take long, because at that point the outside temperature was about 45o, and I didn’t want those doors to stay open for long.

Once the bat was outside, I began to worry a bit. Did we really have enough bugs already for him to eat? Sure, we had a March that set all kinds of records for high temps, but I haven’t seen that many bugs yet.

When I realized that the phoebe in my yard has found plenty to catch on the wing my mind settled down a it. But then again, phoebes aren’t struggling for survival the way bats are.

What do you think – will that bat be okay?